A growing number of biotechnology companies, both in the West and in Asia, are specializing in gene therapies and other regenerative treatments boosted by the approval of the first genetic therapy agent (tisagenlecleusel) by the FDA in 2017. Between 2015 and 2019, the number of industry-sponsored genetic therapy trials more than quadrupled (CAGR + 43%), with the Asia-Pacific region being involved in about 40% of all trials (ex-Japan). Since 2001, over 300 sites in Asia-Pacific have been involved in 335 different genetic therapy trials. 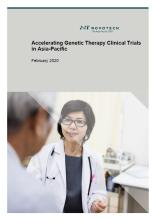